Learn How to Configure a Relay Connector in Exchange 2016 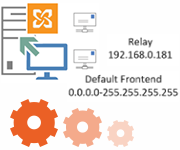 Exchange Server 2016 offers various services for users that are required to perform various functions such as supports office 365 hybrid, Outlook availability on web, etc. Out of which one such feature is to configure a relay connector in Exchange 2016 to provide mapping between different ISPs for sending and receiving of email messages. Nowadays, in almost every organizations various applications or devices are used, which requires SMTP services to perform the functions. In the following discussion we, will discuss the way to configure a connector in Exchange 2016.

There are mainly two types of SMTP relay scenarios in Exchange Server 2016 as mentioned to configure relay connectors.

It includes the applications or devices, which require sending of only email messages to internal recipients in the Exchange organization. When Exchange Server 2016 is installed, the setup routine generates the receive connectors automatically. It is pre-configured that is used in receiving emails from senders to internal recipients. It permits inbound internet email to be received from server that is suitable for internal relay. It can be tested by making SMTP connection by using Telnet and allotting SMTP commands. There is no precise configuration required on server in this case, though it is recommended to use DNS alias in place of real server name. As it permits to configure all applications or devices with DNS alias and further it allows moving that DNS alias to point at different Exchange server at the migration time.

Now the user can test connectors by using Telnet from IP address, which was added to remote network settings of the received connector.

As you have read the discussion about “how to configure a relay connector in exchange server 2016”. On the basis of discussion I can say that you would have learnt the described topic.