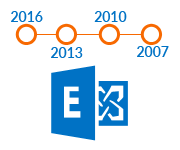 As you know that MS Exchange Server is the leading enterprise messaging server solution in the online market. It was added to Microsoft’s product in April via the release of Exchange Server 4.0. It is a merging point for the migration of MS internal messaging system and their trade PC messaging product.

Internally, Microsoft was utilizing a legacy XENIX system for their email however with Microsoft growing and requirement to migrate to homegrown solution. Therefore, Microsoft developed Exchange Server. Simultaneously, Microsoft had commercial product named as MSMail that changed from the product called Network Courier from Vancouver Company. Many issues were faced to overcome this Exchange Server 4.0 was released. Work on improving the features of product has not stopped since then, as discussed in the following section Microsoft Exchange Server Timeline.

This was the first Exchange Server that was released by Microsoft in March 1996 and later five service packs were released in next two years.

This is the new Exchange Administrator console and opening up integrated access to SMTP based networks for the first time. It has an add-in known as Internet Mail connector helps to communicate directly with servers by using SMTP.

As the last edition of Exchange Server have distinct directory, i.e. SMTP and NNTP services. There is no new edition of Exchange Client and Schedule for edition 5.5, instead of this MS Outlook 8.03 was released to support the new feature of it. It was sold in two editions, i.e.

This edition overcomes various limitations of previous version. As the size of database, storage is increased so the number of services in the cluster is also increased from two to four. It has a dependency upon Active Directory as it does not have in-built directory service. It also added a support for Instant Messaging.

Exchange Server 2003 has various compatibility modes that permit users to migrate slowly to new system. It is essential in large companies with the distributed Exchange Server environment that cannot afford the downtime and expense, which comes with the complete migration. It also has the latest feature that enhanced the disaster recovery and permits administrators to bring server online rapidly. This is only done when the server send and receive mail when the stored messages are recovered from backup. In addition, an improvement in the mailbox management tools permits administrators to execute common chores more rapidly. There are several filtering methods are added to Exchange Server. They are not sophisticated to eliminate spam but can protect from DoS and mailbox flooding attacks.

This version was released on May 2009 and for general availability on November 2009. Exchange 2010 was also a drastic change in the history according to MS Exchange server timeline, which had introduced many newly features. Lets proceed to read newly added features in below features section.

There is another release of Exchange Server 2013 on October 2012. It provides the trail edition at MS website. It was also a big change in Exchange Server according to Exchange Server timeline. Lets move forward to read its newly added features in below section.

It is the latest edition of Exchange Server released on October 2015.

View all of Shini Mohan's posts.