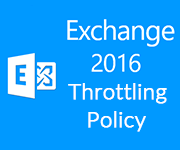 In Exchange Server environment, there is a policy that has responsibility to regulate, control and manage the application rate and performance known as Throttling Policy. This policy is by default activated in Exchange 2007 & all above versions, and has enhanced in different versions of Exchange Server. There are some improvements which have been applied in each versions of Exchange server from 2007 to 2016 and all these improvement provides enhanced features to monitor & control the performance. In this blog, we are going to learn about what is throttling policy in Exchange server 2016.

This policy was first introduced as a new feature in Exchange 2007 and was named as RPC Client Throttling. This feature allow administrators to control & manage the performance of end-users by preventing different client applications. Through this policy, a “back-off” request is sent to the client, whenever Exchange server find out some negative effect from any specific mailboxes. It notify users that sending of any requests should postponed for some specific period of time so that one can prevent the server from going into any hazardous situation, which may lead to decrease of exchange server performance.
The data of back-off request contains two parts which are described below:

By default, the value of RPC throttling factor is 1000. The RPC Average Latency should be less than 100 milliseconds for maintaining the performance of the server. The back-off value of server to client will be in milliseconds, till the expiration of back-off request time period.

For Outlook 2007 users, a ropBackoff request is inserted to the back-off queue of user which involves the information related to current delay of back-off request, and notify its clients to postpone any additional server requests for certain time duration.

In Exchange Server 2010, the throttling policy has became more advanced with improved feature of monitoring and controlling the performance of the server. Here, this policy is named as Client Throttling feature, which manages the performance of Client Access Server and measures the amount of resources utilized by users.

NOTE: There is an another Throttling policy in Exchange 2010 i.e. Message Throttling, which bounds the number of messages and connection processed by Exchange Transport Server. However, in this article, we are going to discuss about Client Throttling feature only.

Automatically, a default throttling policy is generated at the creation time of Exchange environment. Generally, this default policy is sufficient for managing the Client access server, but you can also alter the policies or add new sub-policies as per your requirement. The policies or sub-policies enabled by users are termed as non-default policy. The policy provides administrator a facility to fix an acceptable load on user-to-user basis.

The structure of throttling is designed in such a way that it defends the resources of Exchange server. Accidentally, if non-default policies gets corrupted or is missing, then the throttling policy will automatically fall back to its default structure. In addition, if a situation occurs in which default policy is corrupted, then throttling policy will fall back into the fallback policy of the Exchange because this policy is inbuilt in Exchange, therefore it is less likely to fail.

There are some parameters available in Windows PowerShell and they are discussed below:

There exist a default throttling policy in Exchange 2013 and this default policy is known as GlobalThrottlingPolicy because scope of this default policy is Global in this server. There are other scopes available for users i.e. Organization and Regular. But here we will learn only about policy having Global scope. For new and existing user of any organization who are using Exchange Server 2013 environment, the GlobalThrottlingPolicy determines the baseline of default throttling settings.

Similar to Exchange 2010, there are four cmdlet commands for system resources management using Exchange Management Shell. These cmdlets are same as in Exchange 2010, providing the same functioning.

Along with the development in technologies, there has been a great improvement in the throttling policies of Exchange server. The improvement of Client Throttling Policies in different versions of Exchange is a part of commitment given by Microsoft for upgrading the performance of Exchange & providing administrators with more advance features to control end-users.