How to Disable ECP in Exchange 2016 Server 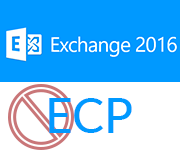 Microsoft completely care about the user of Exchange Server 2016 therefore it is possible to restrict the access of ECP from access using external network or Internet. Because it increases the probability of being hacked the server. There is a command which you can run in Exchange Management Shell to restrict the access of ECP without restricting the access of OWA. Run below written command for disabling ECP, you can see below image for reference.
Command: Set-EcpVirtualDirectory -identity "ecp " -AdminEnabled $false
Where:
ecp is Identity
$false is for restricting the ECP access

By running above command in Shell you will disable the ECP by it will take up to 5 min for applying changes. Therefore if you want to apply immediate change then run below command in shell.
Command: iisreset /noforce

After disabling the ECP if you will try to access it, you will get 404 Page Not Found error. The main disadvantage of disabling ECP is that it won’t be accessible from internal network as well as internet. Therefore it will create an another problem for administrator and the next time whenever administrator want to access ECP it will be required to enable it again by running the same command with some changes which is written below.
Command: Set-EcpVirtualDirectory -identity "ecp " -AdminEnabled $true

In this article we have discussed about how to disable ECP in Exchange 2016 with help of a command by running it in Exchange Management Shell. We also discussed about advantage, disadvantage and the effect of command over OWA. As we saw that running this command is not a very good till that time we are not prepare for creating new CAS only for internal network. The same discussed command to disable ECP will also work for Exchange 2013 server.
I have taken reference for writing this article from Microsoft Technet site to write disable ECP command .