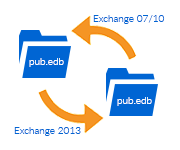 With the release of every MS Exchange server, Public folder became an important feature for discussion. Although, it was stated that Public Folder would disappear but these folders are still used in customer’s environment. In the scenario of public folder migration from Exchange 2007/10 to 2013, a way has to be initiated to provide these Public Folders to the clients at end of migration.

The design of Public Folders in Exchange 2013 has been changed from Databases to Public Folder Mailboxes. Due to this, Public Folders have become high available within DAG, this also involves changes in migration process. In the following section, we will discuss the steps taken to accomplish Public Folder migration.

Various steps are involved to perform the migration of PFs across Exchange 2013 as discussed below.

This process can be skipped if user can go directly to create CSV files manually that informs Exchange which PF mailbox is to be used for each PF.

In this process, user will create the required PF mailboxes to hold all PFs from migration. User will create PF mailbox for all names that are mentioned on the TargetMailbox field of mapping file else, Exchange will copy PFs to PF mailbox, which does not exist. The first created PF will be the master hierarchy mailbox. Only this is created in the HoldForMigration mode. User can also create PF that excludes from serving hierarchy so that emails are not delivered at this phase and prevents from usage.
Start Migration

Though everything seems fine, but still user can verify the public folder migration from Exchange 2010 to 2013 was successful or not by comparing the snapshots that took place in the beginning of whole procedure. As such, follow the instructions in the Prepare for Migration section but this time the PFs are present in the new Exchange 2013 environment.

After completing the procedure and verifying the PFs working on Exchange 2013, the final step is to remove PF database from Exchange server 2010. This is a well-documented procedure and no reason to repeat it here.

In the above discussion, the proper procedure is discussed to perform public folder migration from Exchange 2007/10 to 2013. According to experts, it is quite useful for users to follow the systematic process to avoid data loss. I have described each and every process is in detail and the command execution image is also displayed according to steps of public folder migration processes.